[Editor’s Note: As knowledge strategists (and those aspiring to be knowledge strategists) pursue their work, Tim Powell’s name continues to be heard. I am very pleased to share, with permission, Tim’s latest blog post, from Competing in the Knowledge Economy: Observations by Tim Powell. As we move forward with this exciting management methodology, Tim’s observations continue to provide much new direction (as they will continue to do with his next book, being written as one of the first titles in De Gruyter’s new series, Knowledge Services).  Special thanks to Tim Powell for permitting SMR International to publish his latest post. –Guy St. Clair]

As we enter 2019, the global economy stands at a level of volatility and uncertainty not seen since the Great Recession a decade ago. Trends like rising interest rates, the US-led trade wars, and sales slowdowns are affecting a range of sectors in many global economies at once.

The experience of working during a recession — much less, running an independent business — is a challenge that, once experienced, changes one’s life permanently. In a nutshell, it’s not fun — and not something you prepare for in business school.

I led The Knowledge Agency through two recessions, following each the 2000-2001 “dot com” crash and the 2008-2009 mortgage securities crash. It was humbling — horrifying at times — seeing projects get delayed, then cancelled, then people let go, then whole departments eliminated. The limits of my resourcefulness and resiliency were tested.

As with every adversity I have experienced, I have tried to convert this into a learning experience. I recall the comment of one potential investor, who in our last meeting in 2001 asked me, “Tim, NOW how are you going to sell this knowledge stuff?”

Good question, Dave — and sorry my answer at the time apparently wasn’t compelling enough to keep you engaged. So I have been working to correct that for nearly two decades now. My goal is that everyone who knows my work will be able to develop their own answers to that important question — in time to do something meaningful about it.

In a couple of lectures I gave in the fall at Columbia, I tried to narrow down this issue to its essence. These were “Making Knowledge Sustainable” and “The Knowledge Paradox,” each conducted as a Socratic-style dialogue — with my sequenced questions to the students, and their responses, guiding and framing the discussion. As as often the case when I’m at Columbia, the students not only followed my train of thought, they on occasion spontaneously anticipated and raced ahead toward my destination.

It should not come as a big surprise that organizations behave, in an economic sense, much like individual people do. There is something called the “wealth effect” that causes people, when their 401ks are doing well, to spend money more freely, as if their paper earnings were income — and, conversely, when their investments are down, to cut back. This may be neither a good nor a rational practice, but it does empirically describe the way most people tend to behave.

And so it is with organizations. When the economy is doing well, companies invest in a variety of new initiatives, sometimes without having a clear ROI goal in mind. When the economy is struggling, companies tend to (1) cut back, especially on things that are less-than-directly tied to revenue production, and (2) scrutinize outlays more closely, especially with regard to their ROI and fit with strategic goals.

Knowledge programs are usually among those first affected in an economic downturn.They are “recession-sensitive,” in the parlance. At least partly responsible is that people managing such initiatives are too often not trained in, or even sensitive to, establishing and/or defending the ROI of their efforts. Consequently the expectation that such programs should “earn their keep” by producing a positive ROI is too often not well-established.

The business cycle — with all its ups and downs — continues to be a major driver of organizational life. And knowledge, like everything else, does not draw a “pass” when it comes to economic reality. When knowledge is seen as an overhead expense, rather than as an ROI-positive investment, it is unsustainable in the long run. 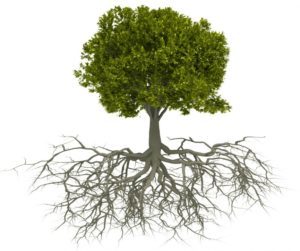 When a strong wind comes, the trees with shallow roots are uprooted and blown away. The trees with deep roots are grounded enough to survive the impact and “weather the storm.”

In the same way, knowledge programs that are grounded in economic reality will survive strong economic winds intact — they are sustainable. I define sustainable knowledge as “an investment that directly addresses the value-producing needs of the enterprise, and as such is subject to the same ROI tests that other investments are.”

One astute student asked, “When there is an economic downturn, isn’t that exactly the time organizations should be investing in knowledge — to compensate for losses in other areas?” This makes sense logically, and this would be the expected response if organizations always behaved entirely rationally. There is much research to show, however, that they do no such thing. And my personal experiences support this conclusion.

Why is “grounding knowledge in economic reality” such a persistent challenge? Our Columbia discussion started with the defining characteristics of leadership, which the students had been studying. The consensus was that key aspects of an enterprise leader’s role consisted of (1) inspiring and motivating the work team, and (2) assuring that the enterprise as a whole is functioning well.

Key tools in both these aspects of leadership are metrics (for example, Key Performance Indicators and operating results). These are useful in advance as goals and targets, and after the fact as tests of “how are we doing?”

But with knowledge, meaningful metrics that directly link to enterprise value are typically not in place. As a result, though there may be wide consensus that knowledge has value, demonstrating and testing that assumption is often difficult. This is for two reasons: (1) knowledge is often not simply a discrete box on an organization chart, but rather is widely diffused throughout other functions, and (2) knowledge is not only intangible, it’s actually invisible to the many organization who take a strictly financial view of things. This in effect creates a “double invisibility,” in that:

The knowledge paradox is that, though knowledge has great value (averaging 44% of enterprise value by one recent study), it is effectively invisible — and therefore resistant to being readily led or managed in any conventional sense.

The value of knowledge

Is there a way forward out of this paradox? I have found that there is, and it’s this: Knowledge is most readily made visible and measurable  through its effects — Results, Outcomes, and Impacts.(Catch the way I worked that little ROI acronym in there?) Enterprise knowledge accrues value only to the extent that it is being engaged and used to produce enterprise value — those “things that matter” to the organization.

Close attention should be paid by knowledge professionals to assuring that the effects of their work are made “real” — tangible, visible, and measurable — to their clients and to others in positions to support and underwrite their work.

Is your knowledge program sustainable?  Are you prepared for the next downturn?  Acquiring knowledge and having knowledge are not enough — it’s what we do with knowledge that counts — and, really, ALL that counts. Thanks to Ed Hoffman and Guy St. Clair for the chance to dialogue with their students, and to Meghan Marx for her support and insights.

Guy St. Clair is the Series Editor for Knowledge Services, from Verlag Walter de Gruyter GmbH, Berlin, the scholarly publishing house specializing in academic literature. The series subject is knowledge services, the approach to managing intellectual capital that merges information management, knowledge management (KM), and strategic learning, presenting and discussing new and innovative approaches to knowledge sharing in all fields of work. Guy also teaches in the Post-Baccalaureate Studies Program at Columbia University in the City of New York, where his course is Managing Information and Knowledge: Applied Knowledge Services. With Barrie Levy, he is the author of The Knowledge Services Handbook: A Guide for the Knowledge Strategist (Berlin: De Gruyter, 2020). He is also the author of Knowledge Services: A Strategic Framework for the 21st Century Organization (Berlin: De Gruyter, 2016).